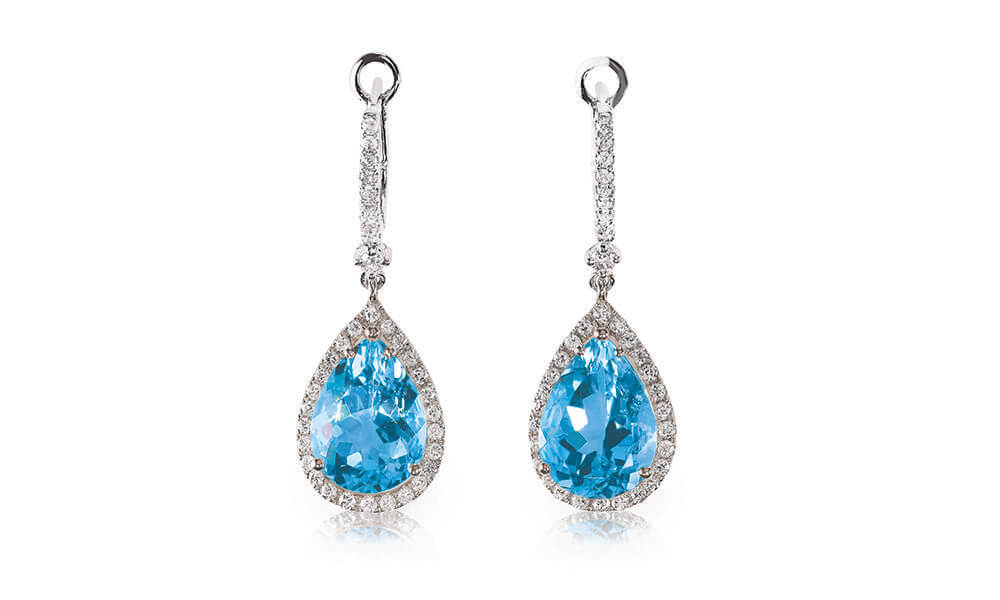 In November, we have two birthstones that are unique and gorgeous: Topaz gemstone and Citrine. We all know a few famous people who wear one or both stones to show off their particular birth month.

When you’ve got the birthstones of November, you’ve hit the jackpot. The rich color and gorgeous hues will make these crystals shine.

The name topaz comes from the Greek word for “golden stone” because its original yellow-green color resembled the precious metal. Today, topaz gemstone is known for its golden yellow look and is found in various colors, including pink, pale green, brown, orange, and blue.

Topaz is considered a stone of wisdom because it balances mental functions, enhances memory, and stimulates the intellectual center.

It’s associated with the solar plexus or power chakra, which also makes it helpful for manifestation work. The golden hues are believed to help you manifest abundance, while pale topaz is said to symbolize peace and tranquility.

Citrine can range in color from yellow to orange and brown, but those found in nature tend to be more yellow than artificial processes have heated.

Its color comes from sulfur impurities combined with iron during its formation process. While heat-treated amethyst is citrine’s heated cousin, lab-created citrines don’t carry the same weight because their color can’t compare to the richness of leonine hues.

Citrine is considered a master healer crystal that encourages positive thoughts, opens the mind to new ideas, and reduces self-destructive tendencies. It also increases mental clarity, balances mood swings, promotes vitality and gives you an overall sense of well-being. Additionally, citrine is said to encourage wealth by increasing prosperity and good fortune in your life. Citrine has tremendous energy for manifesting abundance.

Citrine’s warm color represents warmth, love, and success. Because it emits high vibrational energy, it’s often associated with spiritual growth as well as physical healing. It’s believed that citrine will chase away negative or “dirty” energy such as stress and anxiety. Citrine is often used as a protective stone to ward off bad vibes.

Citrine is the birthstone for those born in November, but topaz gemstone is a gorgeous companion piece that can be worn or carried alongside citrine for added energy and power. If you’re looking into crystals as gifts, both stones make beautiful choices for loved ones this holiday season.

In ancient times, amulets made from gold were believed to cure ailments, increase strength and provide magical protection against evil forces. Over time, silver came to be associated with the moon goddess Diana in her guise of the huntress.

If you’re familiar with astrology, you know that people born under the sign of Pisces are said to have a strong water connection. If you love the idea of wearing healing crystals but don’t want anything too “out there” or dramatic, citrine will make an excellent addition to your crystal collection. It’ll help energize you while infusing positivity into your life.

Citrine is linked to wealth and good health because it has cleansing powers for mental and physical wellness (helping reduce anxiety and stress).

Topaz is the traditional birthstone for November, but citrine has become a famous don’t-miss stone to add to your jewelry box or crystal collection these days.

Whether you know someone obsessed with all things natural or are interested in gemstones themselves, there’s no denying that both citrine and topaz make fantastic options for gifting this holiday season.

Citrine is known as the “gem of good fortune.”

It’s said to attract abundance when worn around your neck. Not only does it promote wealth, but cleansing the body of toxins while stimulating metabolism and regulating blood sugar levels makes it an excellent choice for promoting healthy weight loss, too.

As of November’s birthstones, citrine and topaz are some of the most popular gems to adorn famous figures’ necks, wrists, and ears throughout history. Diamonds were traditionally given as gifts for engagements or other special occasions between married couples in ancient Rome.

However, over time this practice became so widespread that diamonds took on a meaning of their own – representing undying love.

Lana Del Rey is one of many stars sporting gorgeous pieces from Jacquie Aiche’s Love Bites collection. It was designed with her fans by incorporating meaningful stones like citrine, diamond, and topaz gemstone into each design. The moody hues featured throughout the collection also make it easy to mix and match with your wardrobe.

Royal Fame of the Golden Stone

Topaz gemstone was once believed to be more valuable than diamonds, emeralds, or sapphires. Not only is it considered November’s birthstone, but also St. Valentine’s Day’s official gemstone following a trend set by King Charles II in the 17th century.

He gave out topaz rings as gifts for this special day to show his affection for his mistresses before marrying Catherine of Braganza – now many people give loved ones jewelry adorned with topaz on Valentine’s Day to symbolize love and affection.

What is the Origin of Topaz Gemstone?

Topaz has been a favorite of emperors, kings, and queens throughout history who used it for everything from amulets to adorn statues of their deities to jewelry. King Charles II gifted his mistresses with topaz rings during the 1600s when he became enamored with the stone’s beauty – which led to it becoming associated with St. Valentine’s Day after his death in 1685.

A Gem Popular Since Antiquity

Topaz gemstone is one of the most popular birthstones to adorn rings, necklaces, earrings, and bracelets throughout history. It was initially believed that topaz had magical powers to ward off evil spirits or protect travelers from accidents. They were used as amulets in ancient Egypt long before Cleopatra made them popular with her royal court members.

Where can Citrine be Found?

Citrine is mined all over the world – the most famous deposits are located in Brazil. From pink to yellow and even orange, this bright stone is found in many jewelry designs. It’s also found all over ancient sites as far back as ancient Egypt, where it was once believed to protect people from evil spirits, accidents, and illness.

Napoleon even considered citrine a gem worthy of royalty – he often gifted his wife, Josephine, with pieces made from the stone, including her stunning engagement ring after she helped him win the battle at Lodi.

Citrine has a long history of being used for everything from jewelry to amulets that can be traced back to Cleopatra’s royal court members who wore them during rituals meant to honor their deities.

Paraiba Gemstone: From Myth to Reality | The Complete Guide

How Green Garnet Stones can Enhance Your Life